A “Made in Italy” record…

In the mid 1960’s Fabio Crestani, a enthusiastic manager of sport events, and, also an active entrepreneur was working on manufacturing equipment use for maintenance of sport areas and tennis courts with the JET brand. During that time he started manufacturing some special equipment, to be used by cross-country ski enthusiasts for their summer training. These pieces of equipment were made of a iron frame and three large tires, with a diameter of 28 centimeters. They had rudimental ratchet device call “choke”, which was applied on the front wheel. Also included was a break, made of leveraged pressed by the action of the hands against the rear wheels. 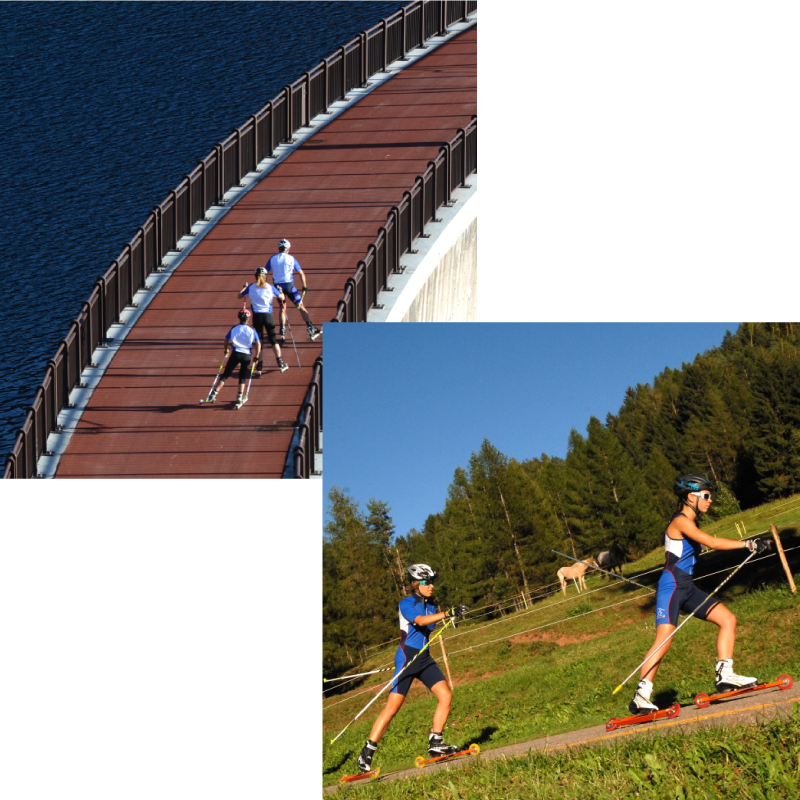 In January of 1973 the SKI SKETT brand was officially founded, for the production of skis for use on grass, and skis with wheel, for cross country users.

These were called by Fabio Crestani “ski roll” and are now internationally known as ski roller or roller skis. In the first roller skis under the SKI SKETT brand, Crestani introduced a patented SNODATO frame. Despite the weight of the models build until the time, this model allowed the execution of the alternate stride, without lifting from the ground the all ski. These models were still using tires, although of lower diameter (18 cm).
A brake was applied on the front wheel, which could be used through the pole or via a knob. The ratchet device was made of free wheel from a bicycle, inserted in the front wheel.

SKI SKETT/F, the first production skiroll produced in Italy
This model, called SKI SKETT/F was the first roller made available through mass production in Italy and marked the beginning of the production or roller skis under the SKI SKETT brand. Many models have built, following the first one. The frames were made of composite fibers, aluminium alloys. The wheels were made adiprene, then of polyurethane made through injection, then of rubber and of polyurethane through mould. In 1975-76 Fabio Crestani, with the help of few friends, organized the first world roller skis competitions, which were held in Sandrigo and Asiago. In 1978 he helped organizing the first Italian Roller Ski Championship and 1979 he founded the Italian Roller Ski Association (A.I.S.R.) which became the year after the Italian Roller Ski Federation (F.I.S.R.). His organizing effort were devoted also the international front. In 1985 the E.R.F (European Roller Ski Federation) was founded, and Fabio Crestani became the honorary president until 1992, when it became part of the International Ski Federation (F.I.S.).
Nowadays the company headed by the son Carlo exports SKI SKETT in many countries throughout the world and more than the 90% of its production.

During the years, SKI SKETT has been the supplier of the Italian National Team (Official supplier for more than 30 years), and also of many other National Teams such as Russia, Japan, Hungary, Germany, Spain, Greece, New Zealand, Australia, Estonia and Argentina. The SKI SKETT skis have been used by the greatest stars in cross country skiing, as like as Pauli Sijtonen, Elena Vialbe, Vladimir Smirnov, Michail Botvinov, Alexyei Procurorov, Virpi Kuitunen, Julija Tchepalova, Andrus Veerpalu and of course the Italian Champions, from Ulriko Kostner, Maria Canins, Maurilio De Zolt, to Marco Albarello Giorgio Vanzetta, Manuela and Giorgio Di Centa, Stefania Belmondo, Gabriella Paruzzi, Fulvio Valbusa, Cristian Zorzi, Pietro Piller Cottrer, the Santer sisters and every member of the Italian National team. Even today, of course, Ski SKETT are used by many champions in all countries of the world.

The Crestani Sport is the company with the longest history in the market.
Among the numerous patents by Crestani Sport there is one of particular interest. Developed in 90s it is a special and absolutely innovative binding system which allows you to use roller ski with normal sports shoes, that is to practice discipline in simply and securely without having additional equipment (shoes and bindings). One of the latest patents made is the STOP & GO, a beautiful brake extremely effective and versatile. The research department of Crestani is working with other interesting patents, both in the field of brake components and other models. 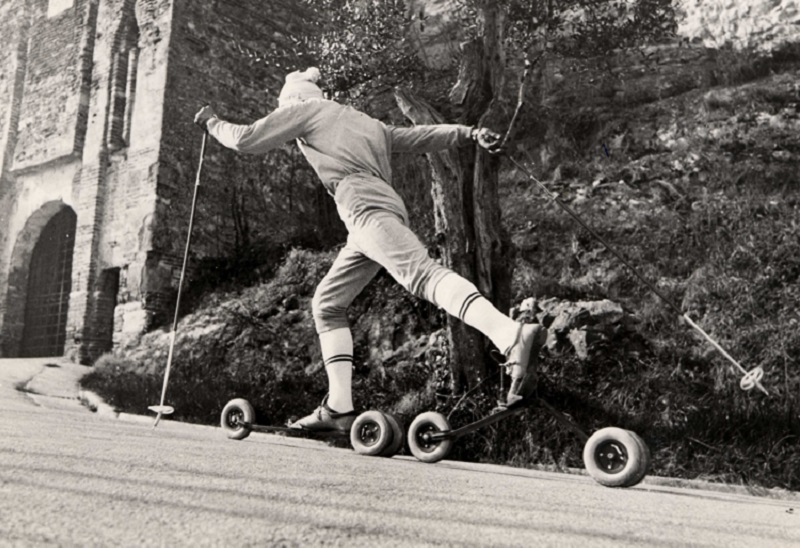 SKI SKETT or the idea of cross country skis with wheels was conceived in the mid 1960’s in the workshop of an artisan Fabio Crestani, located in North – Eastern Italy, in Sandrigo (Vicenza), an area renowned for its industrial productivity. The Company was already known for the production of sporting equipment for tennis courts (with the brand TENNIS JET), to which suddenly Fabio Crestani added the production of some prototypes of skis with wheels. The company, founded in 1973 is still ongoing under the management of his son Carlo Crestani and since its debut has become one of the most popular bestselling brands of roller skis in the world, with the brand SKI SKETT.

Founded in 1973, during its 40 years of business SKI SKETT by CRESTANI SPORT became the roller ski leader brand for the sports sector… The products made by Crestani Sport are the result of passion, experience and advanced technology; SKI SKETT offers a complete range of products for any requirements. 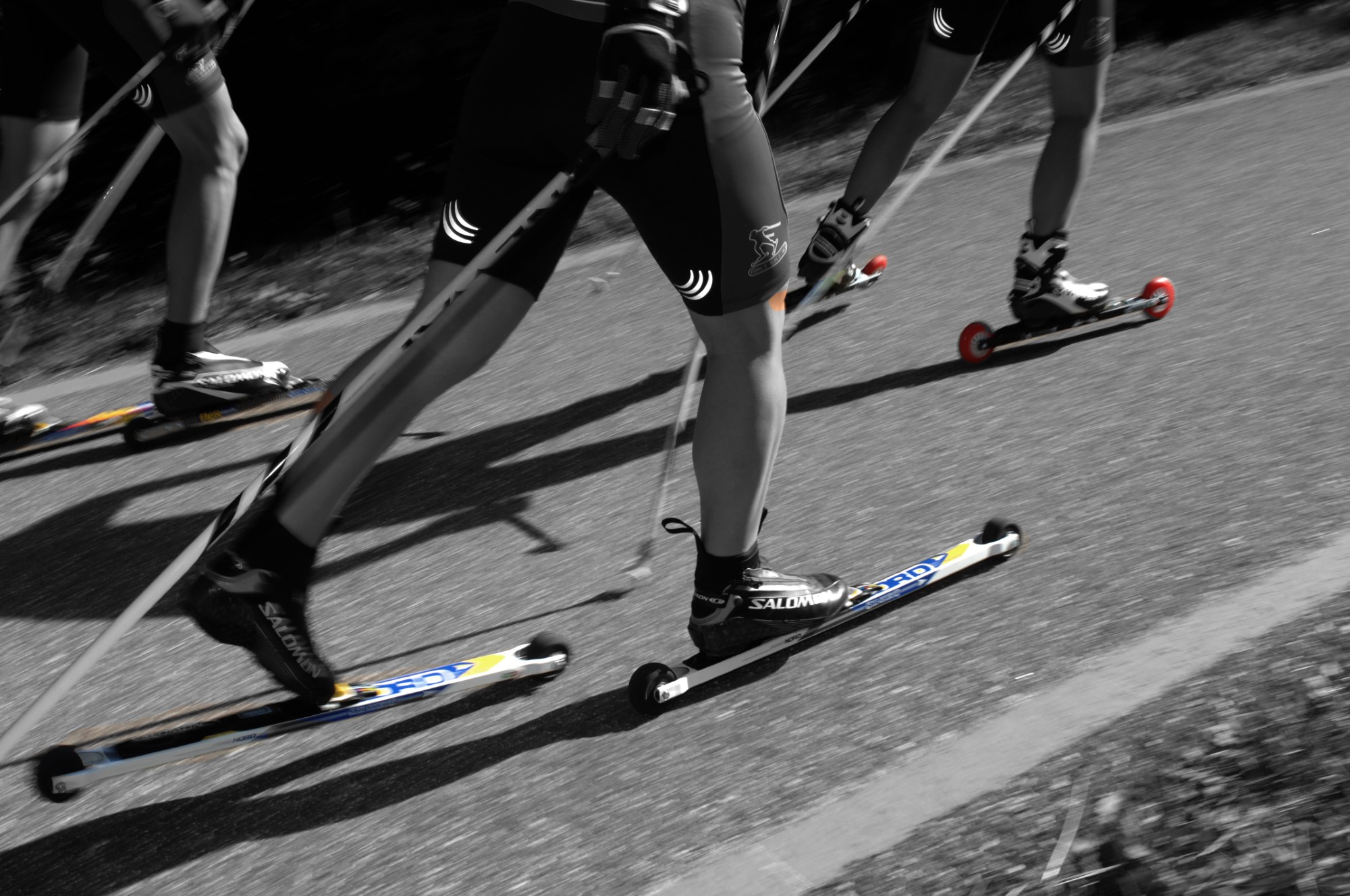 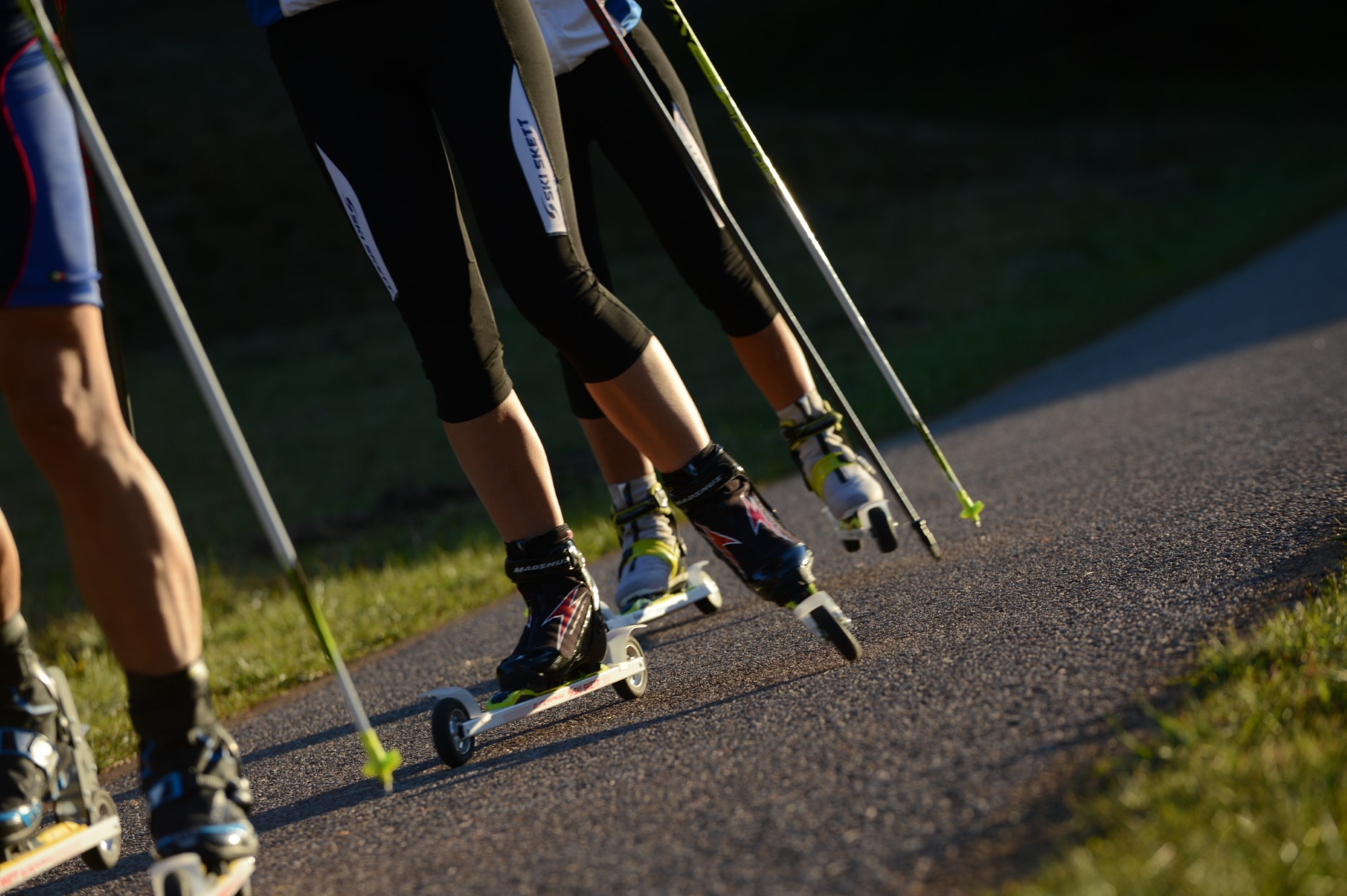 The products made by Crestani Sport are the result of passion, experience and advanced technology. SKI SKETT roller skis are chosen by the most important athletes all over the world. A complete range of models appropriate for both elite and citizen cross-country ski racers which can be used for both training and roller ski competitions.

A unique product on the market

Roller skiing with Ski Skett offers an healthy and funny form of physical exercise both athletes and sportsmen. SKI SKETT products are unique and innovative as a result of careful research and the use of quality construction materials; the right mix for a successful Company. 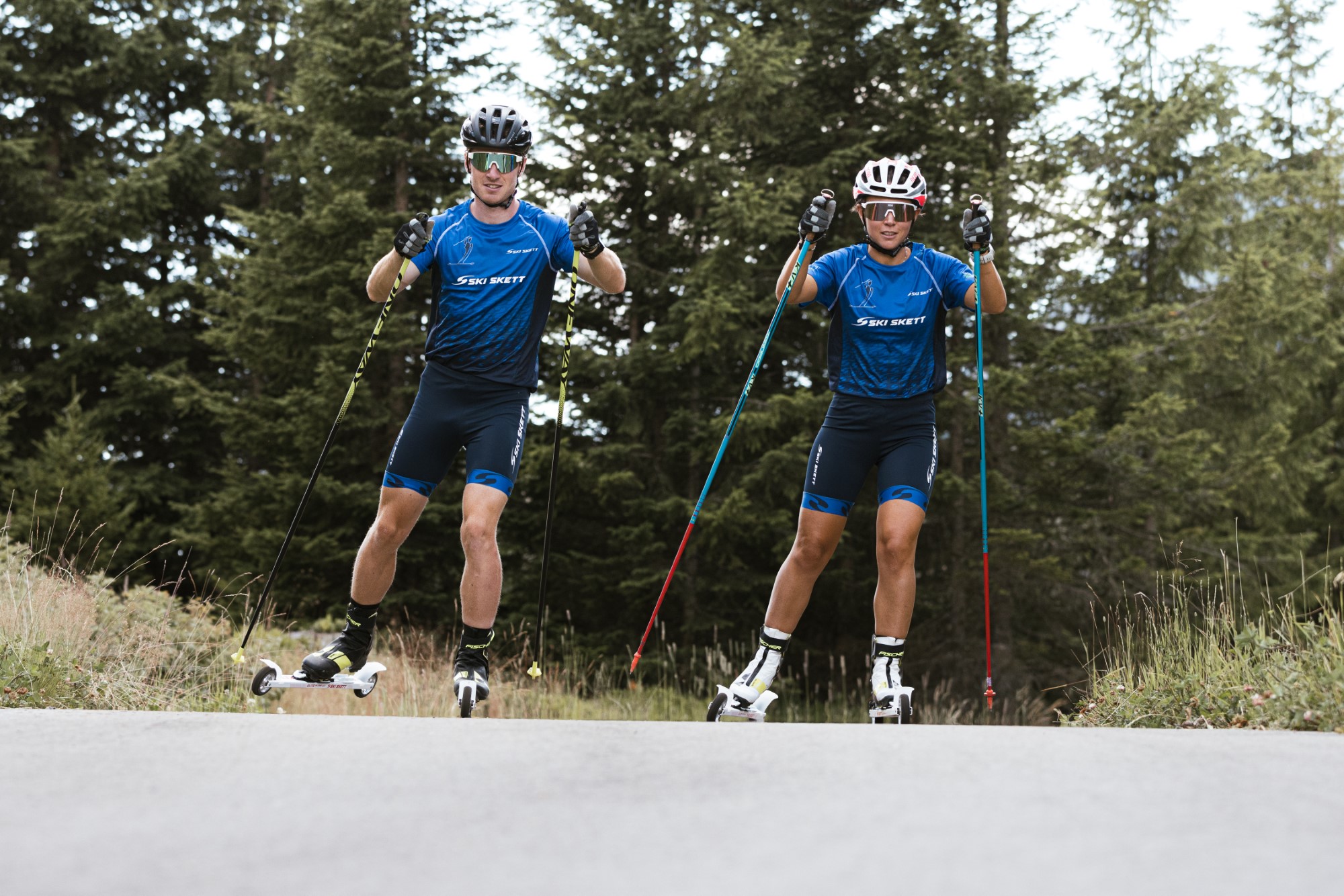 Your cart is currently empty.

To provide the best experiences, we use technologies like cookies to store and/or access device information. Consenting to these technologies will allow us to process data such as browsing behavior or unique IDs on this site. Not consenting or withdrawing consent, may adversely affect certain features and functions.
Read more

Enter your name and email address to receive a 10% discount on your first order.